Entering the Gates of Antares: Part One 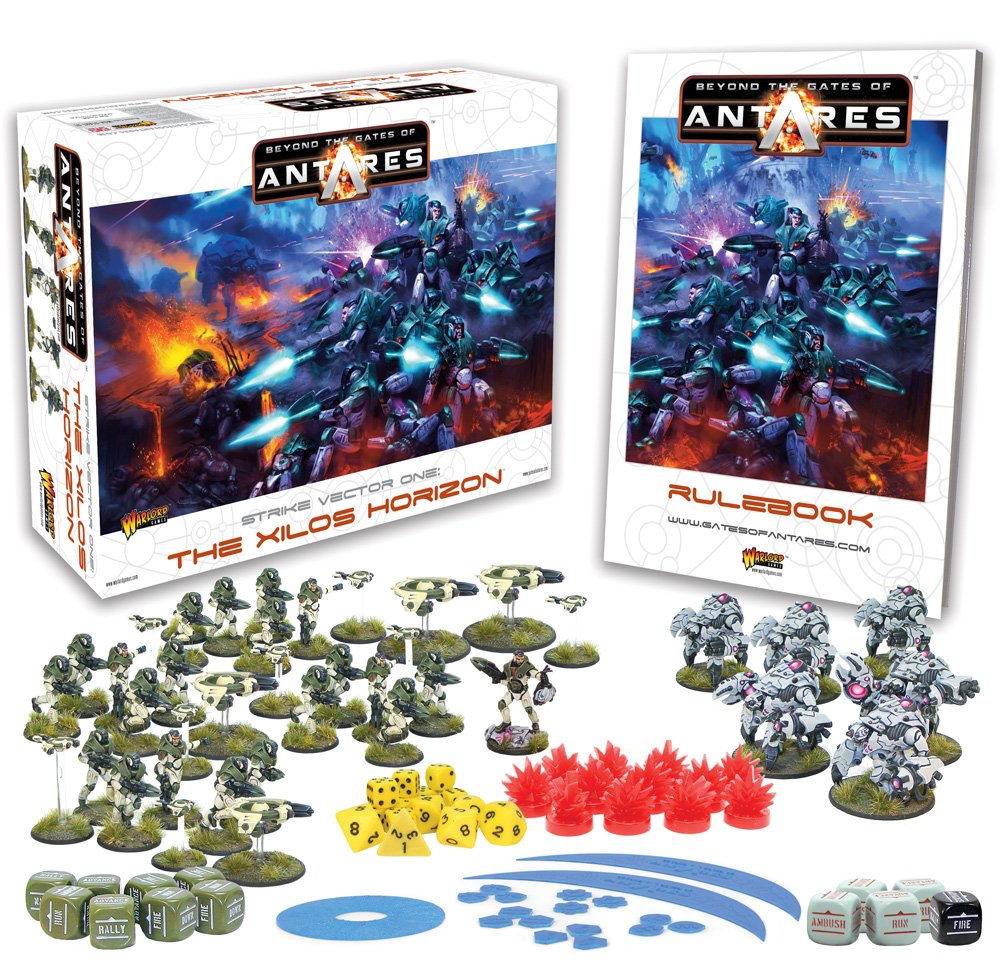 04 Nov Entering the Gates of Antares: Part One

Posted at 22:18h in Miniatures by joseph 2 Comments
9 Likes
Share

Yesterday a box full of awesomeness arrived for me, it was the Beyond the Gates of Antares: Xilos Horizon Starter box set. I will say now I have been blown away by how amazing it is.

So much to the annoyance of my rather tolerant girlfriend I began to pour over the contents of the box, especially the rulebook before I began to put together the first few models. However while I was reading the book it got me thinking as to why I choose Antares as my next game….. why not Infinity or Warpath. What made me choose one sci-fi game over another, in fact why sci-fi why not a new fantasy game?? Well I decided to sit down and put my thoughts down as to how and why I choose to immerse myself into a new game and hopefully everyone reading will have their own thoughts and insights, some may even agree with mine.

What draws you into a game? Why did you buy those first models or rulebook? Had you read good things about it? Do your friends play it? Are the models just too beautiful not to own?

For me the one thing I look for, in a fantasy or sci-fi game at least is the background. All that fluff just waiting to invade my head and fill it with innovations and ideas about how my force should look, what I should call my commander, where they fight and what for. For me a game without a rich background is like a film without a plot, it might look nice on screen but its not pulling you in again and again.

I was a 40k player from the age of 12, which is worryingly 16 years ago, I for a time enjoyed the game but never felt invested into the world, I didn’t really care which chapter my space marines were from or what section of the galaxy they were fighting in. What I love about Antares and also Dropzone Commander is that I have gotten into the games early, I can have all the background I want and I know as much as anyone else does.

The second big thing for me and where I have fallen down a couple of times is, can I get other people to play this game….

Other games such as Bolt Action, Batman miniatures game and Dropzone I have had a positive reaction too and now have at least 3 – 5 other players in each system. So now I am far more careful about which games I choose to invest in. Guildball I made sure at least two other people wanted to play and now there is 5 of us. But as we all know miniature wargaming is an expensive hobby and none of us want to commit funds to games we then don’t get to play.

Bringing me onto my next point which is cost…

Nobody wants to spend hundreds of pounds getting into a new game, I am also one of those people who hates not having an easy access into a game. The starter box of Antares is fantastic value, a beautiful hardback rulebook, plenty of excellent quality miniatures and all the extras required to play the game. As a bonus it’s a two player starter set, now I know many starter sets are two players and I think every system should have a way for you and friend to be able to game straight away. Otherwise you need to spend out on two factions, rulebooks and tokens before you can play (yes I have Guildball and Batman but I love the models). One box set and a friend and I’m ready to go with Antares (well as soon as the rest of the models get built).

So you have finally found a game that you and some friends want to play….

Well now the most important thing in my opinion is the game mechanics, if a game doesn’t play well then people are quickly going to get fed up or bored with it. Bolt action has some awesome (and award winning) mechanics that Warlord have decided to use for Antares. Batman and Guildball use a limited resource mechanic which encourages tactical thinking and dropzone has the use of dropships to rapidly deploy and redeploy troops whilst being a very objective based game. All of these things keep me playing these games and I am sure many of you have other reasons for playing the games you love, be sure to comment what keeps you going back to certain games.

That’s all for now but I will be bringing updates as I progress further through the Gates of Antares.

Now time to build some of those Concord Strike troops……..